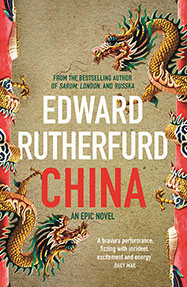 The PAPERBACK of my latest novel CHINA is now available.

This seventy-year family saga starts in the nineteenth century, during the reign of Britain’s Queen Victoria. Through the human stories of British, American and Chinese families, the novel tells the sweeping and dramatic tale of how the West met the exotic Empire of China and humiliated her. The history it relates led directly to the tragic events of the twentieth century and the attitude of China towards the rest of the world today.

Nineteenth Century China was a proud and ancient empire, ruled by the Manchu and forbidden to foreigners. The West, and Britain in particular, had an unquenchable appetite for Chinese tea, but lacked the silver to buy it. So western merchant adventurers resorted to smuggling in opium in exchange. The Chinese Emperor, determined to prevent his people from sinking into addiction, sent the incorruptible Viceroy Lin to Canton, the main hub of the opium trade, to stop it. The British sent gun boats, and the Opium Wars began - heralding a period of bloody military defeats, reparations, and one-sided treaties which became known in China as the Century of Humiliation.

From Hong Kong to Beijing to the Great Wall, from the exotic wonders of the Summer Palace and the Forbidden City, to squalid village huts, the dramatic struggle rages across the Celestial Kingdom. This is the story of the Chinese people, high and low, and the Westerners who came to exploit the riches of their ancient land and culture.

More about this book...

Did You Know?
Read more Did you Knows

I send out occasional updates with news, events and so forth. Please join the mailing list to stay in touch.